Bandipur Tiger Reserve is located at the southernmost tip of the state of Karnataka, India. This 868.8 km^2 forest is part of Nilgiri Biosphere Reserve and is one of the world’s most important habitats for the Bengal Tiger and Asiatic Elephant.

Bandipur hosts deciduous and scrub jungle, interspersed with erstwhile teak and eucalyptus plantations. Waterholes and grasslands dot the landscape, providing the ideal habitat for a vast number of species.

Invasive plants (Understand invasive species here) like Lantana, Spectabilis, Parthenium and Eupatorium have spread over the forest, preventing native species from taking hold. They take up all the nourishment from the soil, and since they have no natural predators, they grow unchecked.

With fewer native species, the pressure falls on the few plants that can withstand the invasive species growth. Browsing and grazing animals like elephants, sambhar deer, and gaur eat up the remaining vegetation. When their food is lost, their population reduces. When the prey population dwindle, then predators suffer. 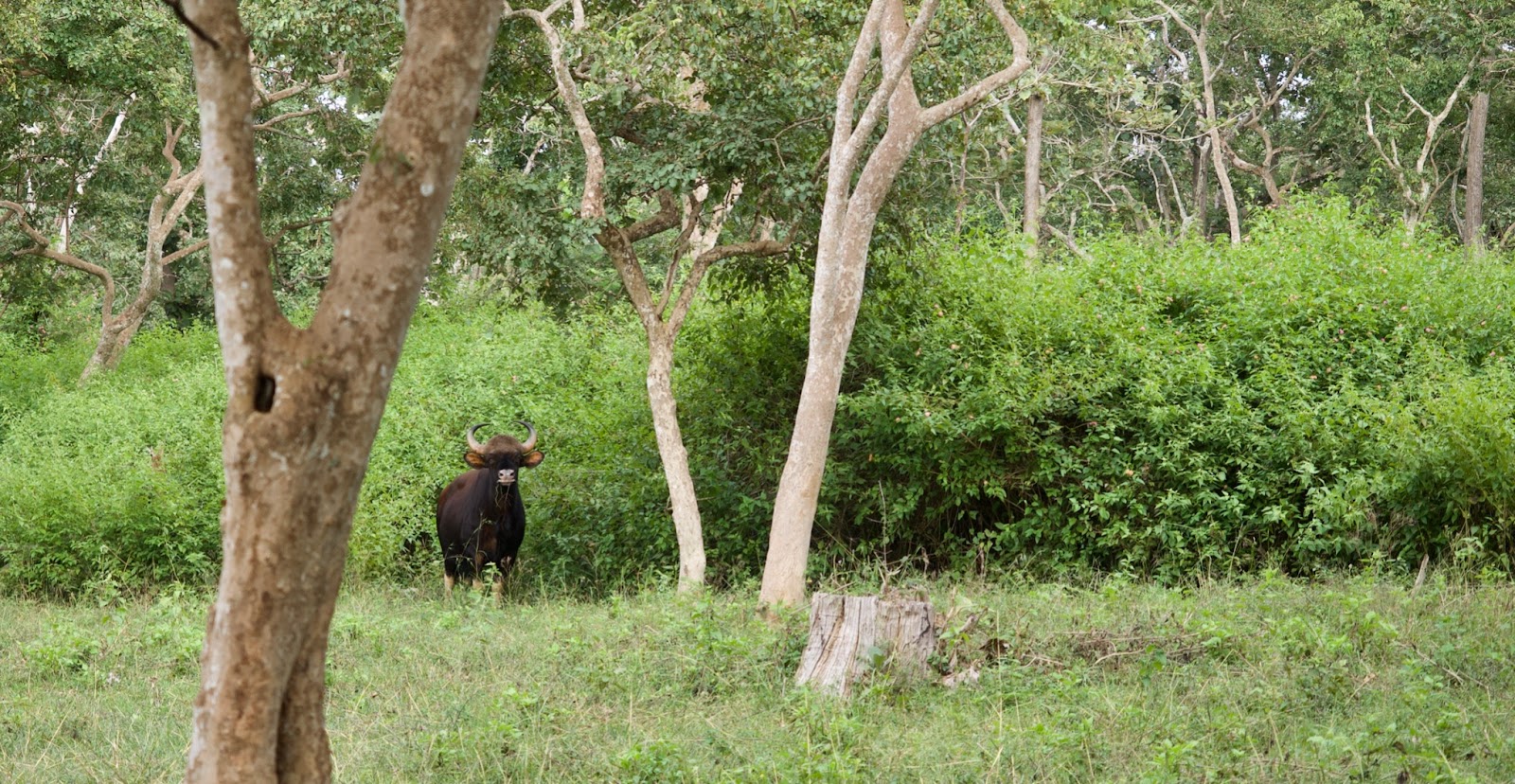 In extreme situations, animals turn to human settlements for nourishment. Herbivores raid the crops of neighbouring farmers, while predators kill and eat livestock. This cascading effect impacts the entire ecosystem , harming both animals and humans.

Luckily, some are working to restore the forest’s natural state. Junglescapes, a wildlife conservation NGO, has partnered with the Karnataka Forest Department to combat the spread of these plants. Employing local tribals in their work, they have restored around 3500 acres of forest land.

Every week I send an email with curated links about the Environment, Creativity and the Human Condition!

Please check your email to confirm your newsletter subscription.

Now, plants like Spectabilis and Eupatorium can simply be cut using a sickle. But Lantana removal is another ballgame. They possess hooked thorns on each stem that cling to the clothes of an unwary passerby. Clearing this plant requires meticulous planning and execution.

Lantana forms a thick, netted bush that grows several feet high in the air. So several people are required to clear this shrub. They start with large forked sticks, with which they lift and hold the brush up. Then, another person comes with a sickle and slashes away at the stalks. This allows the first person to further lift the bush and push it away. Lastly, a third person comes with a shovel, which he uses to dig up the plant’s roots. If left untouched, these stumps will sprout new shoots in a matter of weeks. So they must be entirely unearthed by this long and cumbersome process. 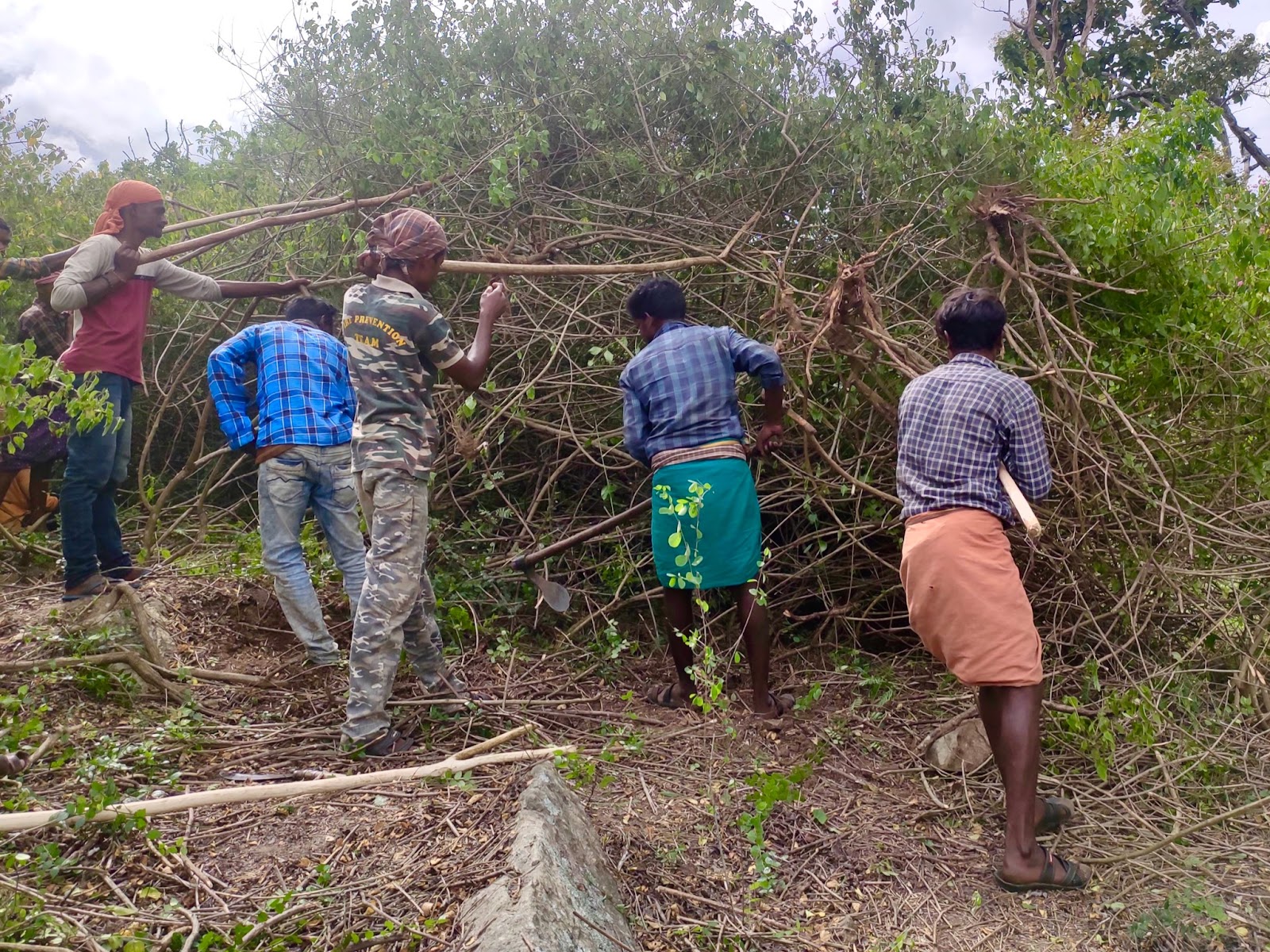 The now cut-up lantana is then turned over and stacked, with the leaves towards the ground and stems facing upward. This ensures no stalk remains attached to the ground. Like this, they plough through the forest, dealing with small patches of Lantana at a time.

While some parts of the forest are allowed to regrow naturally, other sections require some assistance. This is where the role of seed planting comes in. Self-help groups of tribal women diligently gather seed pods of native trees, which they then break open and segregate into various piles. These seeds will then be transported and planted in the affected regions to bolster the area’s rejuvenation. 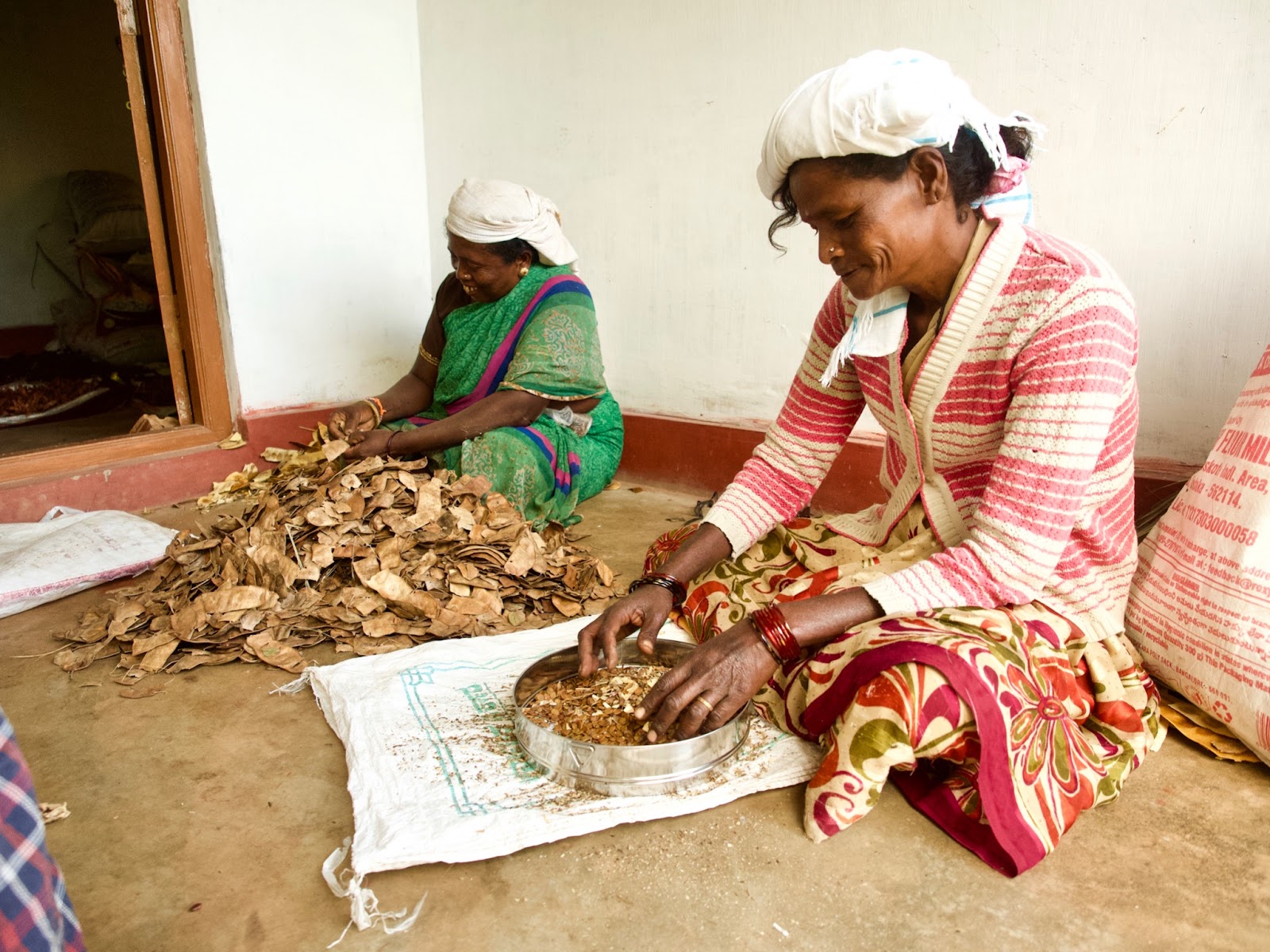 To address soil erosion, they employ certain water conservation techniques. They dig large pits along slopes to catch runoff rainwater, while along seasonal streams, they erect beaver dams to stem the flow.

Importance of the Tribals in the Project

Junglescapes employ people from the Kuruba and Soliga tribal communities in their restoration work. This inclusive approach toward conservation has many benefits. 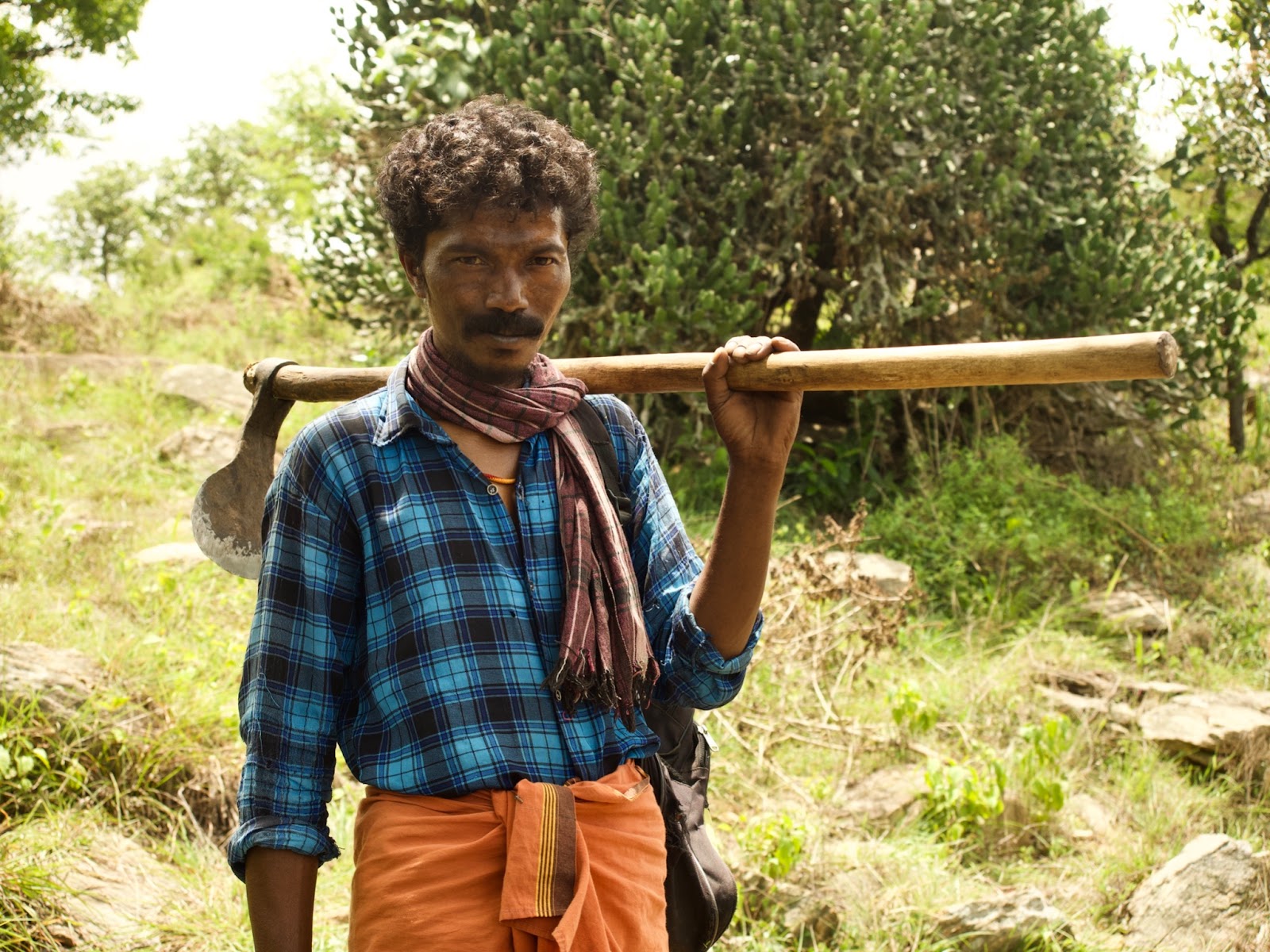 Tribals here have long woven themselves into the functioning of the forest. They have spent generations living amongst the trees; its natural energy has seeped into their customs and practices. Possessing an eternal cache of knowledge, they comprehend the problem better than anyone. Their generation-old wisdom is vital for their restoration work, benefitting the forest and its wildlife.

By employing the tribals, they provide them with livelihood. This job gives them 12 months of guaranteed income, something they are unlikely to find in any city or town. Moreover, this profession is uniquely suited to their skillsets. Junglescapes offer Eco-based livelihoods to around 50 tribals and thus empowers them. 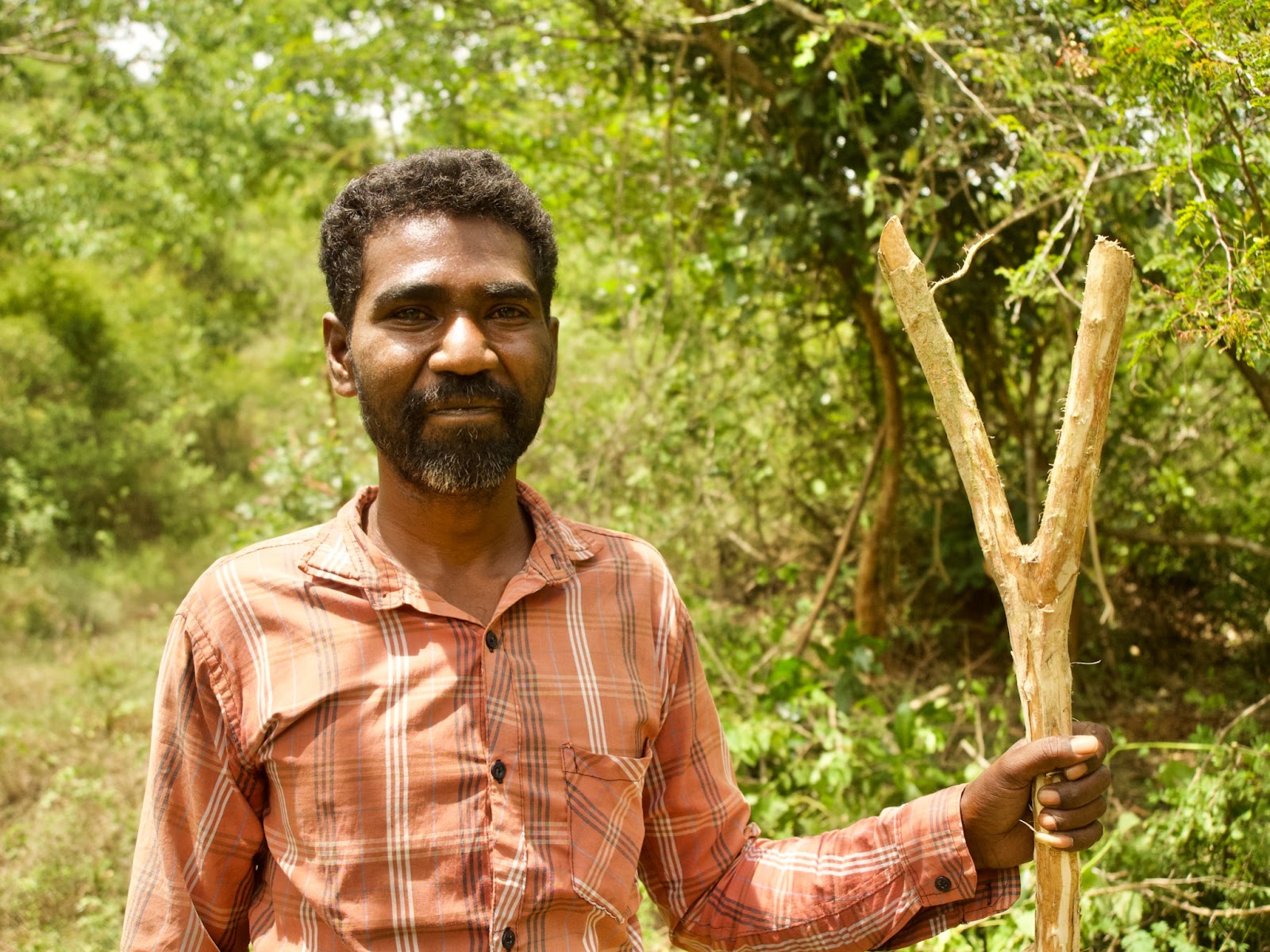 Regrettably, much of this tribal wisdom is disappearing.

Tribal knowledge is passed orally between generations. They don’t exist in written records. Sadly, our culture places too much importance on “scientific thought and documentation”. If some practise isn’t officially catalogued or listed, it is considered illegitimate. Since tribal intelligence lay solely in the minds of a few, with their demise, this wisdom is lost.

Removing these invasive species has seen a rapid rebound in wildlife activity in the affected regions. Many species that were earlier absent now flock to the area. Regions that were first inhabitable for certain animals now harbour them in large numbers. Here are a few examples.

Gaurs and elephants both graze and browse. This means that they feed on grasses and shrubs alike. With the profuse lantana growth, these animals could only browse, with grazing restricted to the open meadows. This distinction meant that these animals had to move between habitats to feed. Now that the Lantana has been removed, both types of vegetation (grasses and shrubs) are found in equal quantities, thus creating the ideal environment for these behemoths. Their dung piles and footprints scattered everywhere are mute testimony to their preference for this habitat.

Before, when there were fewer browsing plants, the population of Sambhar deer reduced (as this is an essential component of their diet). Since Sambhar are the primary prey for tigers and wild dogs, their reduction affects these predators. Wild dog packs, which used to number up to 25, came down to a measly 2-3. Neighbouring parks like Nagarhole, which have less lantana growth, show larger packs than Bandipur. Tigers had to work harder to catch their prey, sometimes sufficing with chital and wild pigs. Now, in these regions, a healthy number of Sambhar are seen. 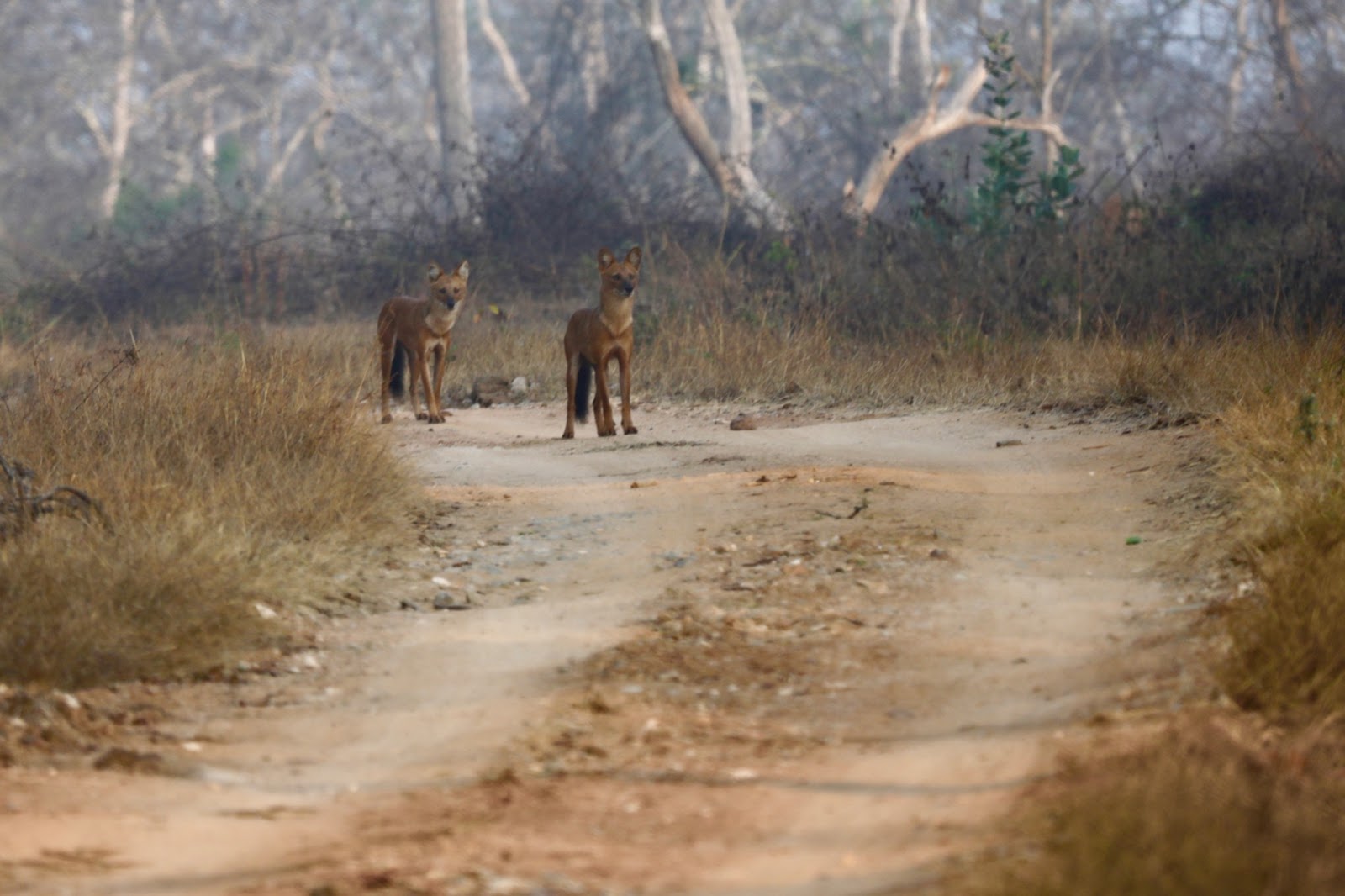 Another spinoff effect the Lantana growth had was on the Vulture population of Bandipur. Being large birds, vultures need a run-up before they take off. Typically, they stumble forward for a few feet as they flap their wings before lifting off.

But with the thick lantana growth, that space vanishes. Carcasses among the Lantana rarely get scavenged by vultures because they cannot land anymore. Spotting them itself is hard among the unchecked growth.

Visibly, there is a marked difference before and after the restoration. Before, the Lantana used to prevent one from seeing into the forest. The visibility was a meagre 10 metres or so. Now that the Lantana growth has been removed, one can see far into the woods.

The presence of invasive plants poses a direct threat to the entire ecosystem. With the Lantana removal, we are can see the wildlife is thriving. Junglscapes are fighting an enormous battle. They deserve all the support they can get. The tribals that plough through the dense Lantana are some of the many unsung heroes of out time.

Enter your email ID below. You will receive an email asking you to confirm your subscription. Once you confirm, sit back and enjoy content delivered right into your inbox. It’s free!

I am a young adult, interested in nature, photography, art and culture. An aspiring polymath, I share my learnings through my blog. I also include insights from my favourite books. View more posts